A Research Study of Atlas Prophylaxis as developed by René-C. Schümperli was undertaken in 2006 and reported on by Dr. Rainer M. M. Seibel of Mülheimer Institute of Radiology in his expert report of 2009.

Dr. Seibel states in his ‘Expert Report’ on the Research Study of Atlas Prophylaxis undertaken in April 2006, that he and his team launched the study about René C. Schümperli’s Atlas Prophylaxis at the university institute (Mülheimer Institute of Radiology). In this research study they examined a total of 114 subjects.

In his research rtudy of Atlas Prophylaxis, Dr. Seibel observes: “Our objective was to be able to determine the precise position of the atlas in relation to the occiput and the axis. In a prospective study, we performed MRI examinations in three views using standardized examination sequences. Subsequently, René-C. Schümperli’s atlas prophylaxis was performed on each of the subjects examined, after which they underwent a second MRI examination.”

The images were evaluated at medical workstations to determine the position of the cranio-cervical joints, the position of the vertebrae in relation to each other, and the rotation of the atlas.
The examinations were evaluated by two independent physicians. The results showed in almost all cases a rotational malpositioning of the atlas with respect to the occipital joint surfaces prior to atlas prophylaxis therapy. After the atlas massage method had been performed, the joint surfaces were shown to be in the proper position.

In the second phase of the research study of Atlas Prophylaxis Dr. Seibel personally studied the procedure and interviewed practitioners to assess the safety of Mr. Schümperli’s method.

Dr. Seibel observes that “The procedures developed by René-C. Schümperli constitute a massage technique for ameliorating symptoms arising from problems in the craniocervical junction. The technique most often leads to success by relieving the muscular tension that has been caused by malpositioning of the upper cervical spine…”

In summary Dr. Seibel concluded that “According to our study, all cases of malrotation have been shown to occur in one direction (toward the anterior left). This corresponds to the thesis proposed by René-C. Schümperli in 1993, according to which the first cervical vertebra is found in a rotational malposition tilted forward, upward and toward the left.” He further states “…subjects consistently achieved an improvement in head rotation after the atlas prophylaxis. This result is primarily attributable to relaxation of the short neck muscles at the craniocervical junction. What is surprising is that this improvement in head rotation is sustained. We documented this in the follow-up studies on our subjects. We witnessed no negative effects after atlas prophylaxis.”

Furthermore in concluding the Research Study of Atlas Prophylaxis Dr. Seibel also stated “According to our findings, and in keeping with the physical and anatomical conditions, we would rate Schümperli’s method, when properly applied, to be without risk. The breadth of the spinal canal at the craniocervical junction and the associated distance of the bony mass of the atlas from nerves and the spinal cord (significantly greater than for other vertebrae) would lend support to this. Specific training in this massage technique is a prerequisite for performing atlas prophylaxis *, and in our opinion, should result in approval for practice.” 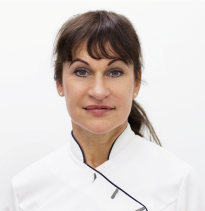 *Marie Casalini is trained at the highest levels as a practitioner of the AtlasPROfilax® method, you can contact her for more information here